In Salento, I again crossed paths with Jasper and Hanne, the Belgian couple who I first linked up with for Christmas in Panama, and subsequently New Years in Cartagena and my birthday in Bogotá. They are keeping a similar pace and route as me on their way down to Argentina. They’re also awesome people and we get along great.

In the narratives of people doing these long motorcycle overlanding trips, you always hear about these instances of people meeting other moto-travelers on the road, and then proceeding to ride together for a while. This always seemed like it could be nice, but until now the mechanics of this always eluded me. For one thing, I tend to shy away from hostels and more social lodging options where you might run in to such people. But also, like, how does that subject get broached, and how do you figure out where to go together, and what to do, and when to part ways? Intractable questions for the common introvert.

Well, it turns out you say something like “hey, want to ride together,” and then “where do you want to head,” “what do you want to do,” and eventually “I think I might split off tomorrow.” I wish someone would have told me that earlier.

But anyways I met up with Jasper and Hanne again in Salento, and we decided to ride around the area together. We were near the Valle de Cocora, a small valley home to the Quindío wax palm, the tallest palms in the world, which grow up to 200 feet tall. There is an official park, but like most nature parks around, it consists mostly of parking lots with overenthusiastic attendants and chintzy souvenir stalls. We just made a quick stop. 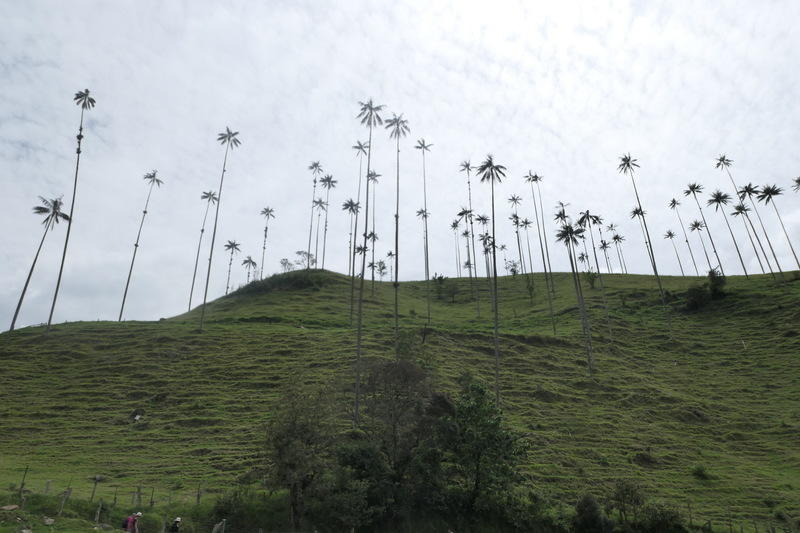 From there, though, J&H had heard of an epic dirt road nearby, from Salento to Toche, and we decided to give it a spin. And it turned out to be pretty stunning, a 4-ish hour ride studded with beautiful views of the wax-palmed valley, and the road itself, fantastic, a tiny backcountry dirt road, wild enough to be interesting but tame enough not to be tiring. 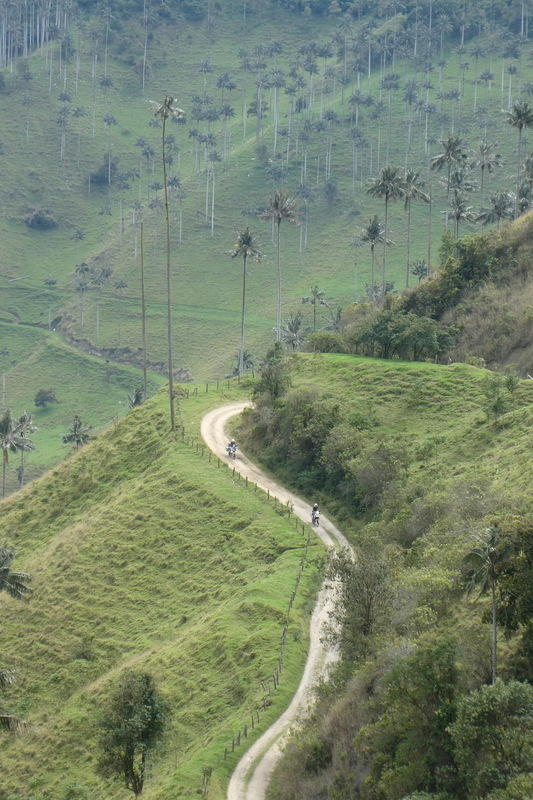 But this I think this bit about the road is important, a key part of “adventure”1 motorcycle travel. We decided to go down that road because it was a fun road to ride. And in the end, it isn’t the road that I will remember, like the sweeps of its turns or the quality of its dirt or whatever. The memorable bits are the valley vistas and fresh air and the glimpse into life in the Colombian countryside. But for all of that we wouldn’t have experienced that if we weren’t searching out a fun ride, and I think that’s unique to motorcycle travel. I don’t think I would be searching out fun roads if I were renting a Camry, and I certainly wouldn’t be searching out fun roads if I were backpacking from town-to-town. So in a way the best parts of “adventure”2 motorcycle travel don’t have much to do with motorcycles, but you couldn’t get at them without one.

TL;DR it was a fun ride. 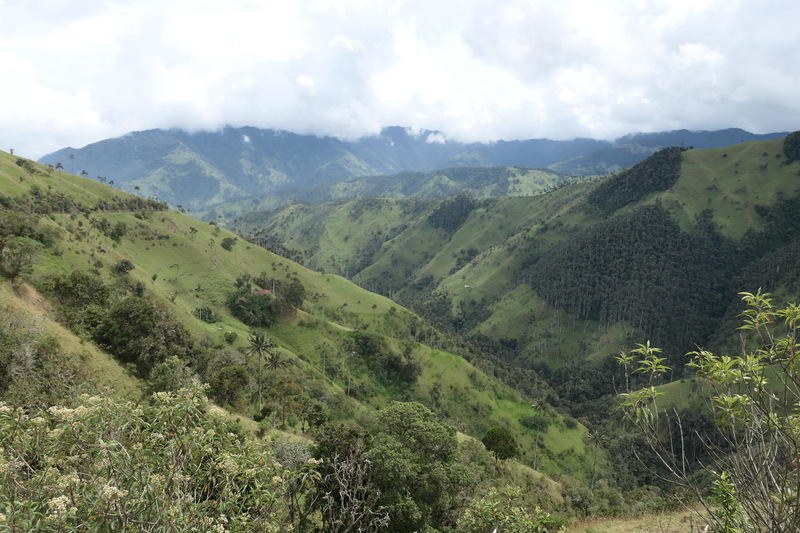 The next day we headed a few hours south to a hostel3 that had just opened up and came well-recommended. It’s run by a Colombian guy and a Dutch guy who had met traveling around Colombia by motorcycle and then decided to open a motorcycle-focused hostel to keep the dream alive. It was a fairly laid back couple of days, although I did swap bikes and go on a short ride with the Dutchman so he could try my Africa Twin and I could try his KTM 7904, which, that thing is trouble. We duly dropped each other’s bikes, which is how you know you’ve given a proper test ride.

Hanne and I also tried our hands (wings?) at paragliding, which is a popular activity in the area. Skydiving and bungee jumping are two things that have never appealed to me. Really, they are the opposite of appealing to me and my palms start sweating just thinking about them. But I’ve always wanted to give paragliding a try. No free-fall is a good start, and then it always just seemed so graceful, flying like a bird, coasting on updrafts. 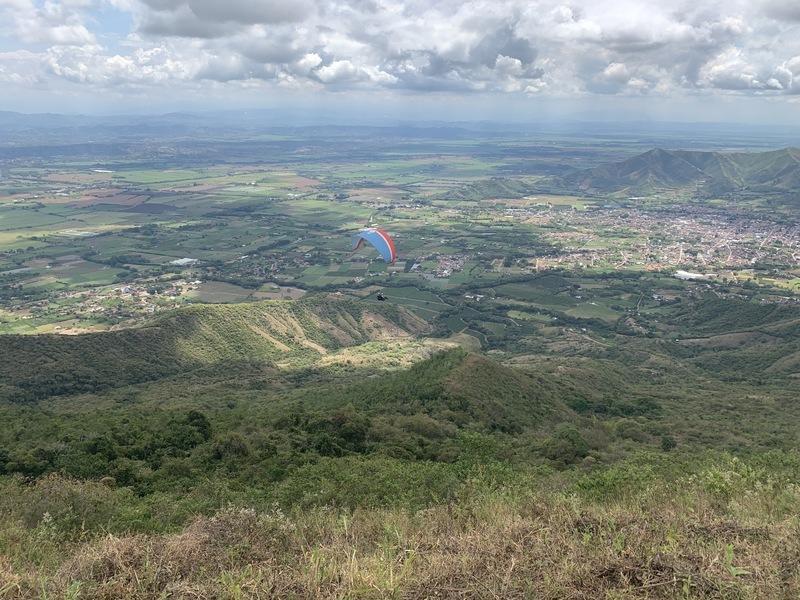 It was pretty cool. Nary a stomach drop to kick things off, and then just gliding around, as promised. One non-obvious factor is that you get nearly instant and pretty heavy motion sickness, enough to make me mildly concerned the whole time that I was going to rain down vomit on some poor unsuspecting sheep below, but luckily I had been advised to skip breakfast that morning. Notwithstanding, I would do it again. 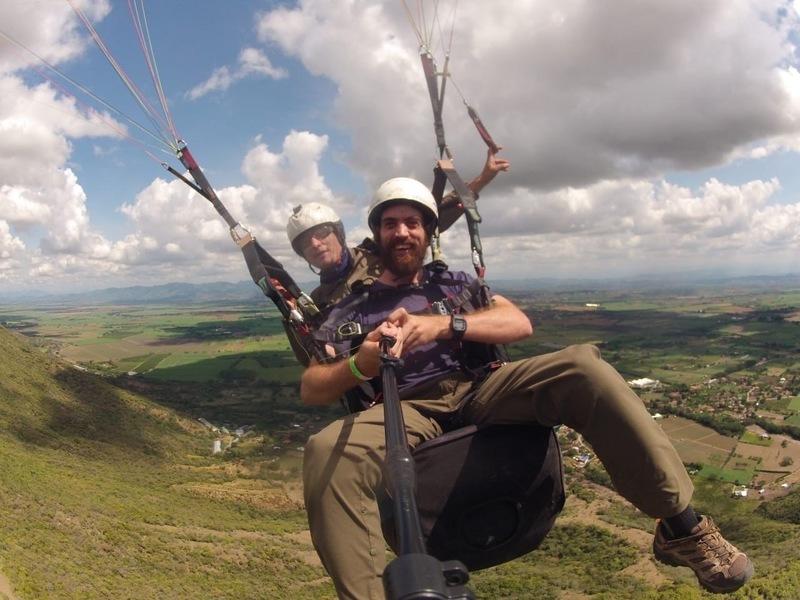 I split ways with J&H the next morning, as they had a deadline to get the border (expiring insurance). I’ll see them again. Meanwhile, I wanted to check out Cali. 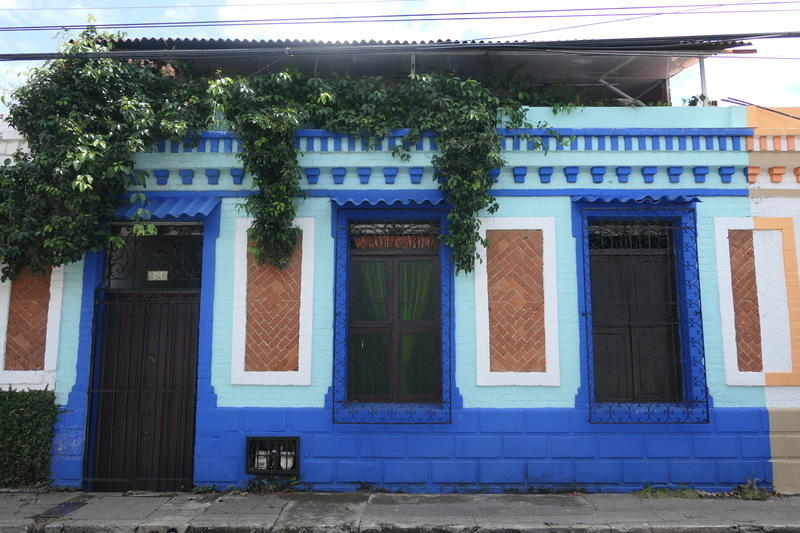 Cali, third most populous city in Colombia (2.2M), best known for being a major center for salsa music. I started my day with a little street food tour. The highlight there was trying like a dozen fruit which I had never even heard of before, the most strange being the borojó which tastes like rhubarb and bleu cheese. There’s also a whole world of different kinds of passionfruit which I was not heretofore privy to.

I didn’t really have it in me to head to a proper salsa club, but I did spend the evening at a viejoteca, which literally translates to something like “old person discotheque,” and the idea is some old guy with a massive salsa collection starts a bar to play people his salsa collection. The collection really is impressive, and he can tell you a story about every record there. That place was my speed.

I find myself now in Ipiales, 7 kilometers north of the Ecuadorian border, which I will cross tomorrow. Colombia has been so good. I don’t know what expectations I had, but it has exceeded them handily. Rich and endlessly varied landscapes, excellent people, charismatic cities, and great adventure.

And, one last treat on my way out: El Santuario de las Lajas, built over the Guáitara River at the site of an apparition of the Virgin Mary in the face of a cliff.