I’ve got to back up a bit from the last post a bit to fill things in. I wanted to post about that struggle of that day while it was still fresh in my mind. I think it’s safe to say that that morning was the most miserable state I’ve been in so far on this trip, but it wouldn’t be a proper adventure without some good, honest struggle. Anyways, backing up.

Belize is a curious place. It is Caribbean first and Central American second. Entering the country, the first indication of this is that everything is in English, Belize’s official language. It is widely spoken, but perhaps not quite as widely as Belizean Creole, which is pretty fun. Spanish is not far behind. The English is because Belize was a British colony, not gaining full independence until 1981. Of course, it is not just language that makes it Caribbean, but the broader Creole culture in general, blended with the Hispanic Mestizos and the indigenous Maya. (And the Garifuna who have a pretty fascinating history. And, uh, a decent amount of Plautdietsch-speaking Mennonites). This makes for quite the fascinating mixing pot, and of course really good food.

I was pretty short on time in Belize, which is about to become a theme. I wasn’t able to check out any of the cayes which are one of the biggest tourist draws. I cut through the country from the Yucatan to Guatemala, stopping the first night (Thanksgiving, incidentally) in Orange Walk, a small city built around processing sugar cane, and then for a couple nights in San Ignacio. There I spent a day inner-tubing through some nearby caves, which was pretty neat. The caves were surrounded my some grade-A primordial jungle. 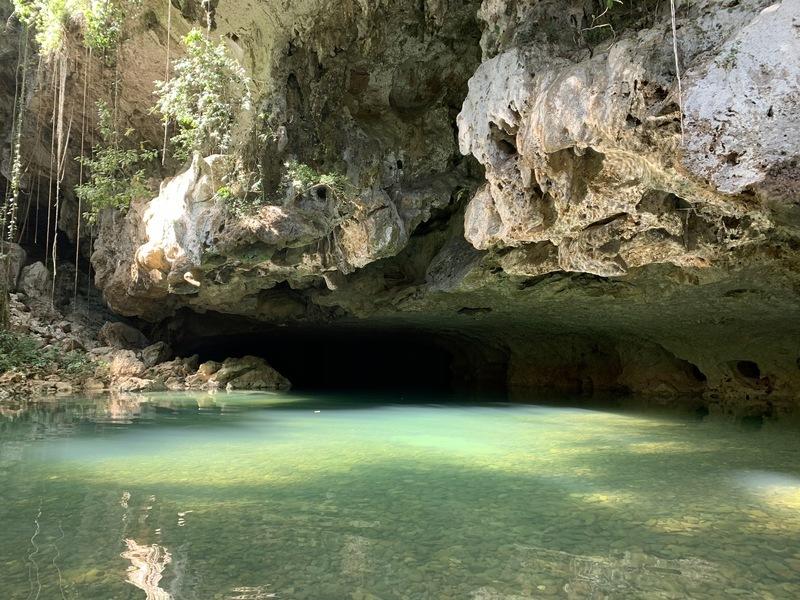 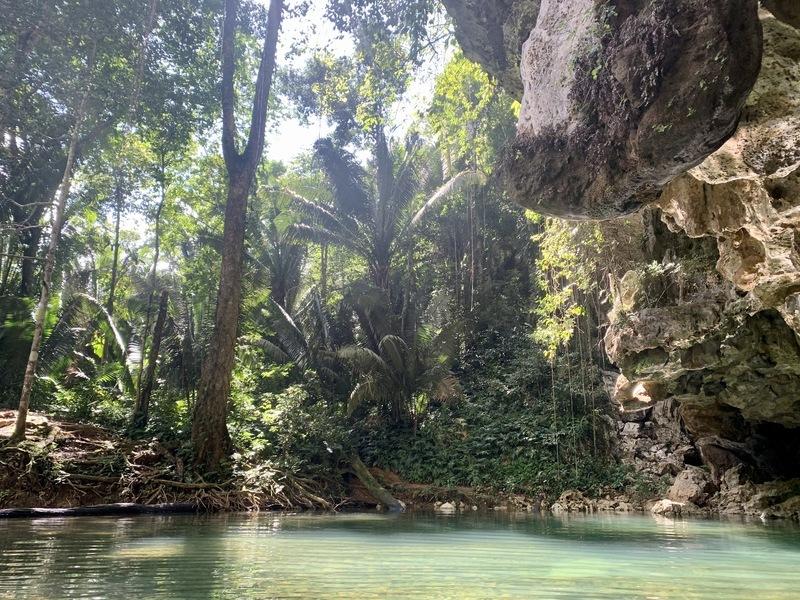 From there, it was a not-too-painful border crossing into Guatemala, to El Remate, a small town not too far from the Mayan ruins of Tikal. Which was pretty neat. 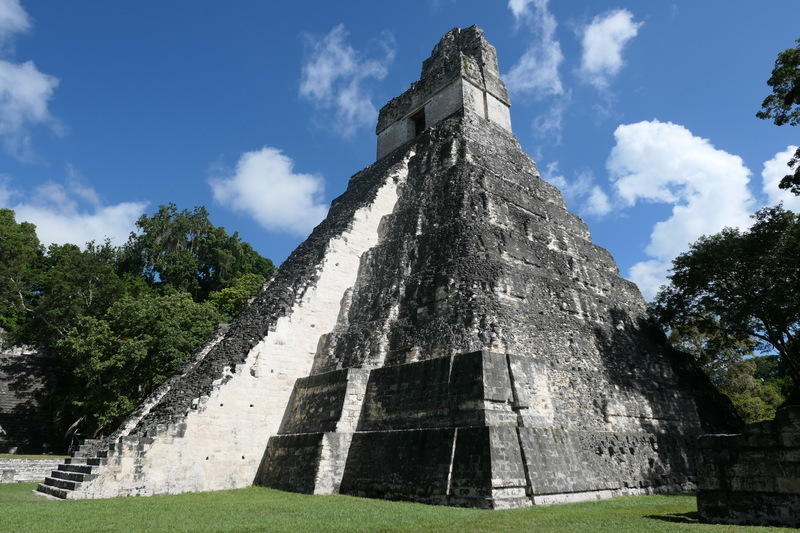 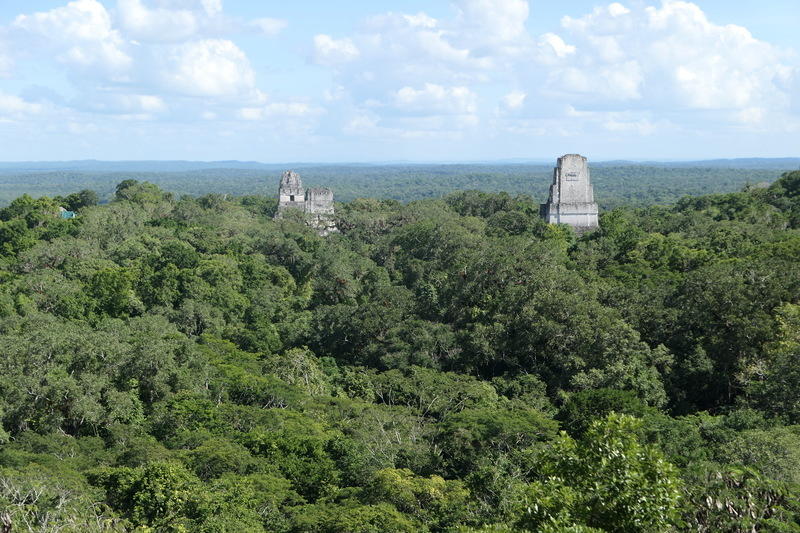 The day after Tikal I made my way south to Langquín, a small town in the central mountains of Guatemala that serves as a gateway to Semuc Champey. I was a bit perplexed why Google Maps was telling me that the 273 kilometer ride would take nearly 7 hours, and thought there was surely some mistake with only 50 km left and Google still indicating 3 hours to go. Which is when the pavement ended, and how. The road quickly turned to extremely rocky dirt, winding very steeply through the mountains. One lane, often with a sheer drop on one side, and with the occasional oncoming truck or bus for added spice.

It was an awful tricky road and I am still a bit surprised with myself for picking my way through it successfully. I definitely put some training to good use from an off-road riding camp I did up in Oregon this summer. “Eyes up, light on the controls” was the refrain, which I would chant to myself anytime I encountered a particularly tricky section. I guess it worked.

That road eventually comes down a mountain and returns to pavement, just before the turn-off to Langquín. The road down the valley to Langquín quickly reverts to dirt, which even at the time made me think “I hope it doesn’t rain before I leave.” 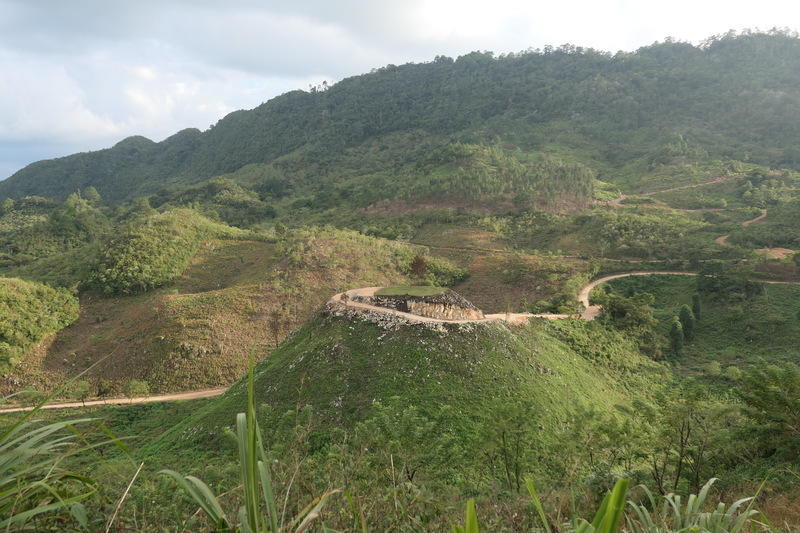 The next day, the trip to Semuc Champey was an eventful one. After a long ride in the back of a pickup truck down even worse roads, the first stop was a water cave tour. The guide asked us if we had brought headlamps, which of course we had not, so we were each issued a candle with which to navigate the cave. Like, an ordinary candlestick candle. Keeping the candle lit became a fun challenge as wading through the cave became swimming through the cave became climbing up waterfalls in the cave. Now would be a great time to show you pictures, but this is also when I found out that iPhones are not quite as waterproof as advertised. Anyways, it’s one of the wilder tours I’ve ever been on. Highly recommended.

After the water cave tour it was on to Semuc Champey itself, a series of turquoise pools along a limestone bridge suspended above the Cahabón river. It was pretty spectacular, both from a vantage point above as well as swimming through each of the pools below. 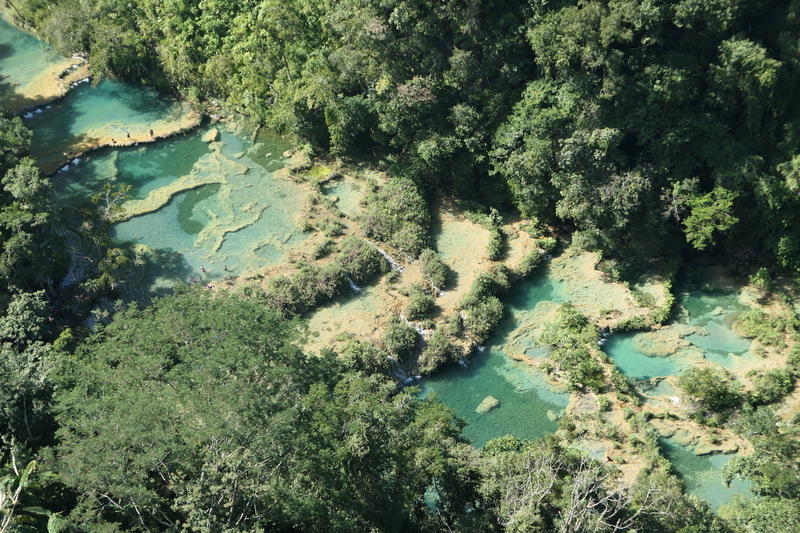 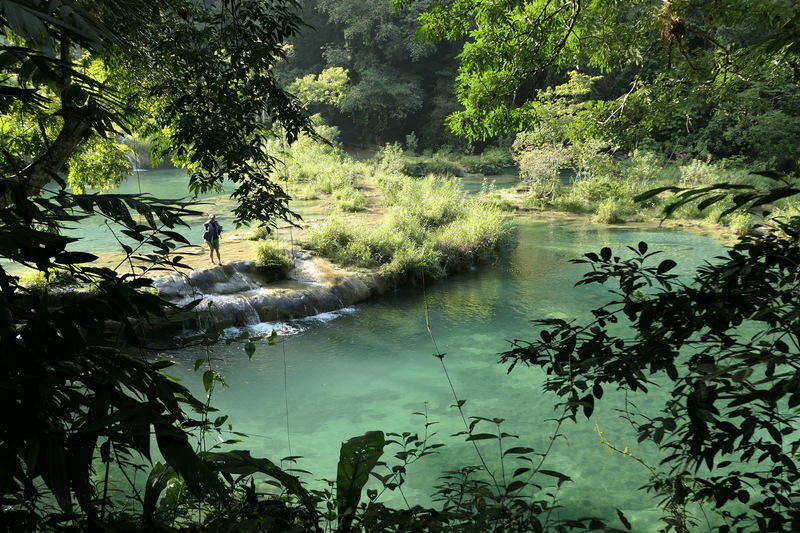 The loss of a working phone was a bummer, but a pretty solid day, all-in-all. You already know how the next day went.

Make it to Guatemala City I did. I had a bit of time to wash my very smelly clothes, procure a new phone, and generally pull myself together before Marianna arrived the next day. Make it to Guatemala City she did, too, and seeing her was really very great. She packed a suitcase full of motorcycle gear (and spare parts and fresh undies for me) and the next day we got on the bike and took off for Antigua Guatemala. As the name perhaps suggests, it was the previous capital of Guatemala, pre-independence, and thus has a charming colonial old town, with an imposing volcano nearby. 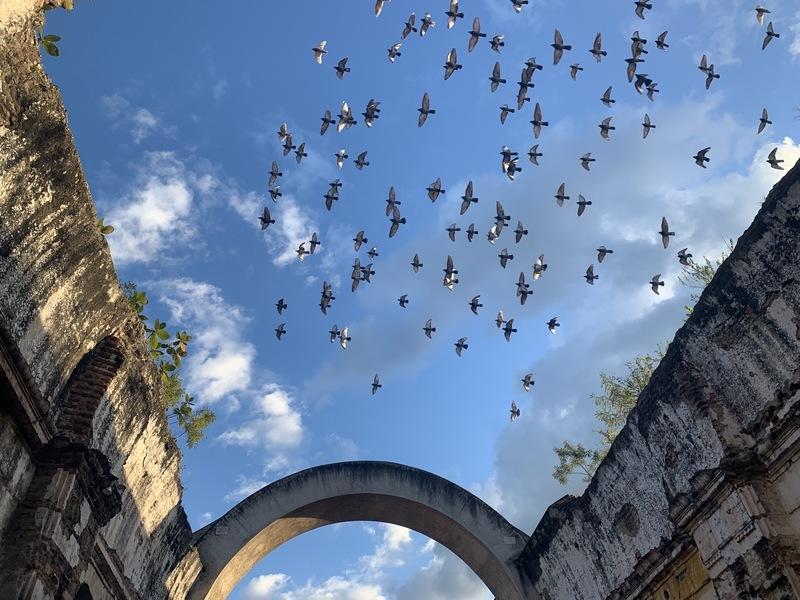 From there we went to Lake Atitlán, not far to the west. Atitlán is a stupid pretty, a big, pristine lake beside 4 volcanos. It’s surrounded by a number of little villages, many reachable only by boat, with the main hub being Panajachel, which is where we stayed. 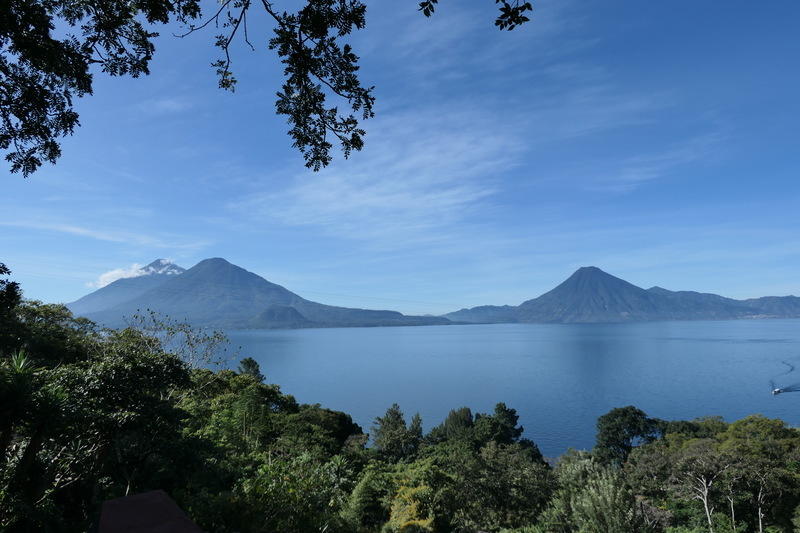 We spent a day hopping around a bunch of villages on the lake. First San Pedro, the second biggest town on the lake, backpacker haven, and a fun place to walk around. 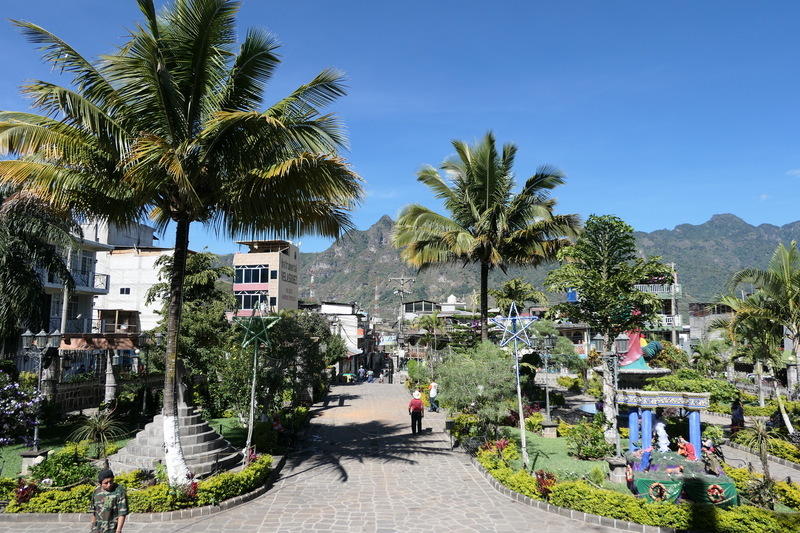 Then San Juan, just over a hill from San Pedro, where an enterprising tuk-tuk driver constructed a tour for us. First stop, a textile collective, where women do the entire process, starting with picking cotton, then spinning yarn with it, then dying it, then weaving it into all manner of clothes and blankets and everything else that you make with cloth. It was pretty neat to see. Then on to a honey production place with six different species of “Mayan bees,” each producing a different honey, one of which will cure what ails you. Then to a chocolate production place, where again the whole process is done by hand, then up to a nice mirador overlooking the lake. 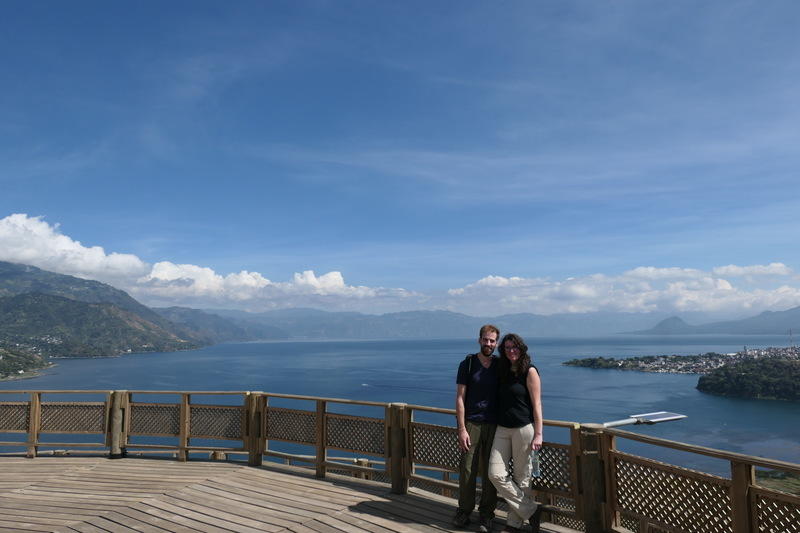 And finally, to a coffee production place, which was really cool. It’s harvest season, so as we were there, people were trudging in with sacks of fresh-picked coffee from their family farms. 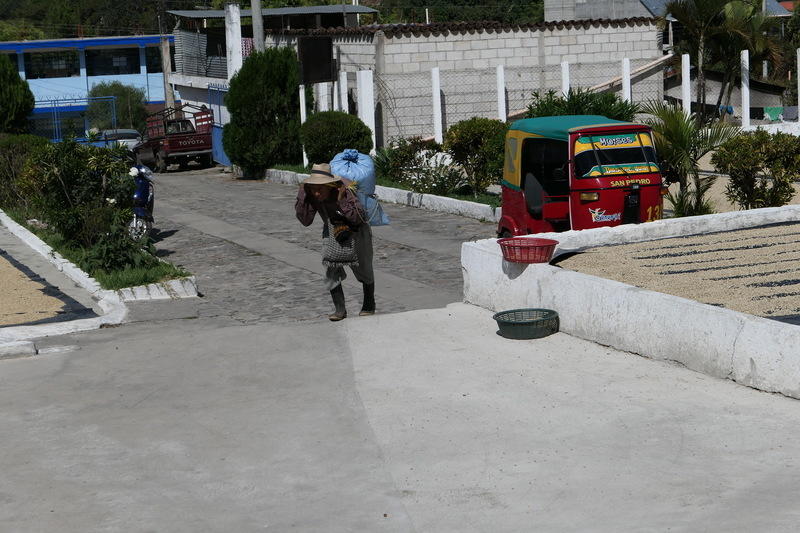 And then the whole process of sorting, hulling, fermenting and sun-drying the beans. Super cool. 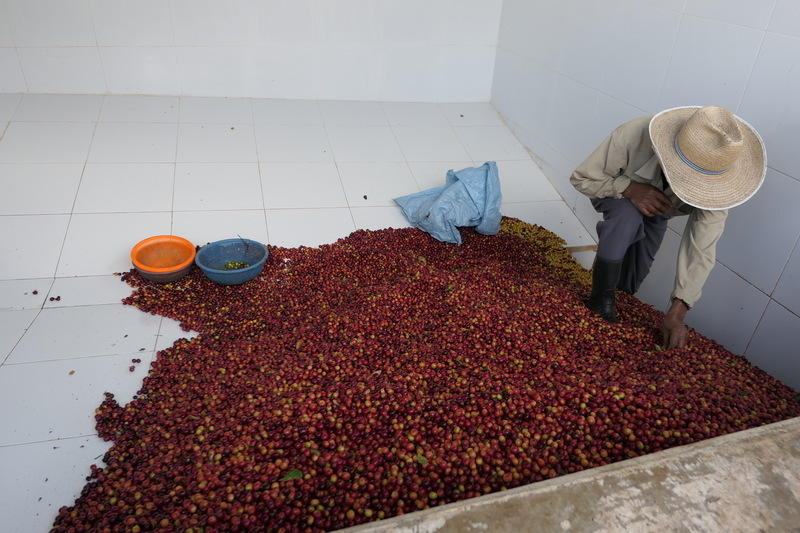 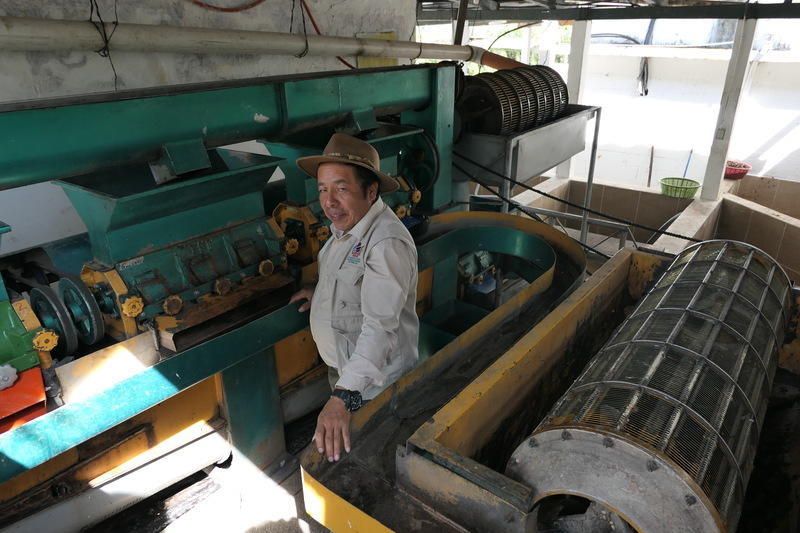 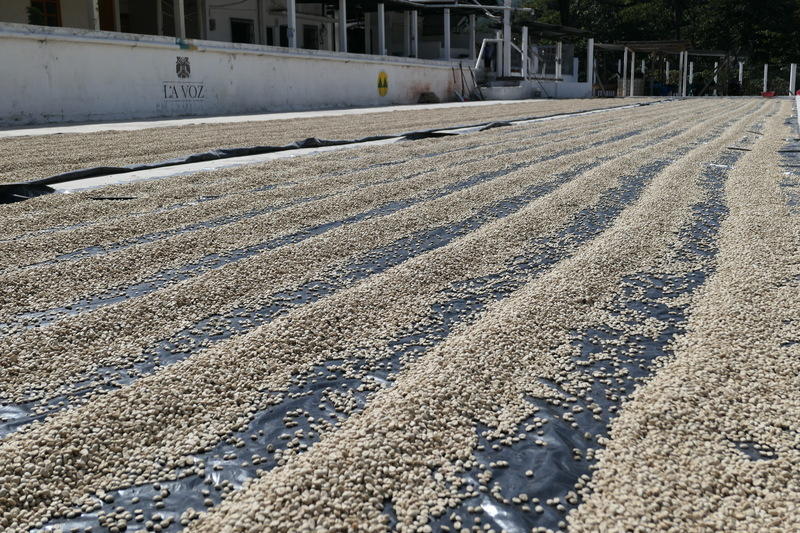 After our comprehensive San Juan tour, we stopped in at San Marcos, which somehow became a gringo hippie haven replete with yoga hostels, ads for full moon cacao ceremonies, etc. And then our last stop was Santa Cruz, a village really hugging the mountainside which was a solid hike to get to from the docks. 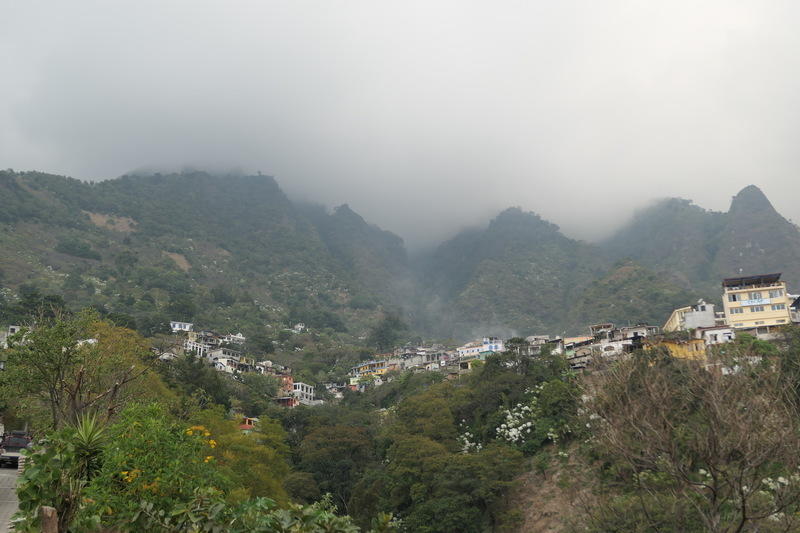 The next day we rode back to Guatemala City so Marianna could fly home the day after. It was a really great time and I miss her a lot already.

After she left, it was time for me to start booking it south. More on that later though, as I’ve already unintentionally written another novella. Sorry about that.