From the mountains of southwest Oaxaca, I was started feeling a bit pressed for time and there was one more major area of Mexico which I knew I wanted to have a good bit of time in, namely the Yucatan Peninsula. So, from San José del Pacífico I began a mad dash to the other side of Mexico.

My first stop was Salina Cruz, a small, industrial port city on the Oaxacan Pacific coast not known for anything in particular. From there I cut east, destination Tuxtla Gutierrez, a city holding down the middle of Chiapas. I stopped here, rather than the more charming tourist destination of San Cristobal de las Casas an hour to the east, to have an easy path to visiting the Cañon del Sumidero. This is a canyon cut through the mountains of Chiapas by the Grijalva River, short in length but very imposing with vertical walls rising up a kilometer from the river. So from Tuxtla I hopped on a colectivo a.k.a. combi, the passenger vans running set routes but not set schedules (besides “often”) which fill in all the holes left by more traditional public transit. Chicken buses, jeepneys, marshrutkas, matatus, same thing. Anyways, this brought me to Chiapa de Corzo, the small town on the cusp of the canyon where I walked to the embarcadero and got on a boat for a tour. 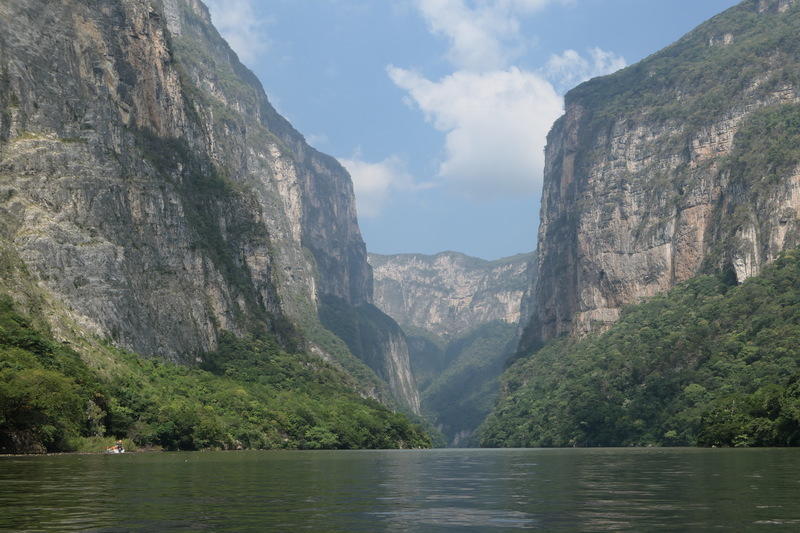 Besides the awesome canyon itself, there are also a lot of cool birds, monkeys, and alligators to be seen. 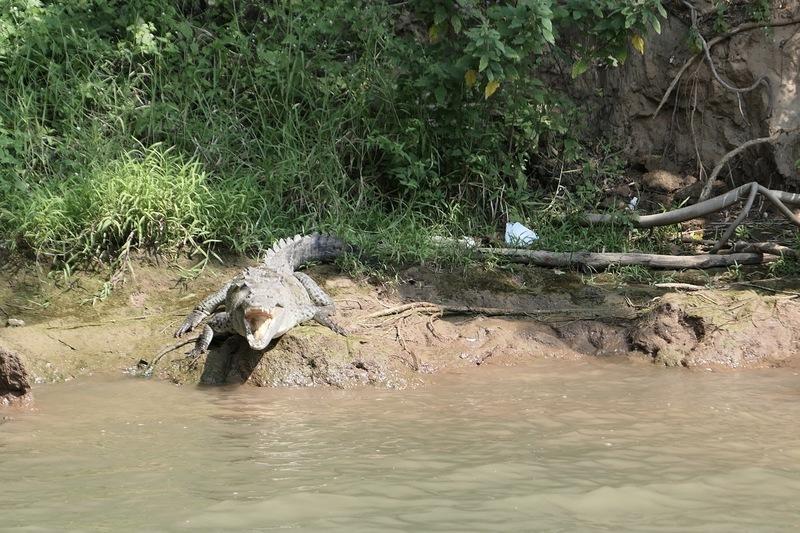 The next day, I made way through the mountains to Palenque. I only remembered after I got on this road (MX 199) that it isn’t known as the safest road in Mexico, exactly, with some history of highway robbery over the years. It’s a slow, twisty road, stopping through dozens of small towns, each with their own unique collection of topes and other hazards.

A word about topes, before I continue, to fill in those who may have not driven in Mexico. A tope is a speed bump, and topes are life in Mexico. In the traditional sense, speed limits aren’t enforced very much here. The signed speed limits are usually quite low and I and many others generally drive a fair margin faster – for example a typical highway might be signed at 90 km/h but a more realistic speed would be 120. However. When it comes time to slow down – on the borders of a town, near a rural bus stop, or Just Because – it is not asked of you by signs, nor threatened by police, it is demanded by topes. Topes come in many forms, from large ropes laid across the road that give you a little bump, to gentle concrete humps that rock you off the seat a bit, to high, right-angled curbs in the middle of the road that rip your axle off if you are going over 2 miles per hour. And the warning given of their approach varies similarly, from ample signage and bright paint on the pavement, to no signs and perfectly camoflaged topes that you don’t know about until your ass has flown a foot and a half off the saddle. When you are following a car, it’s easy enough – when they slow down, you slow down; when their axle is ripped off, you also slow down. But alone in traffic, it’s always a fun guessing game when the next one will be.

Anyways, it wasn’t the particular abundance of topes on the road to Palenque that made it sketchy, they just added to the fun. And I really don’t think I was in any particular danger on this road, but it had a reputation which made for a stressful 4 hours working my way through the mountains. In the end, the only issues were getting stopped by locals several times trying to shake me down for donations. When they spot people approaching they pull up a rope across the road, making you stop while they talk at you, at which point you give them a quizzical stare and say “uhhhhh” long enough for them to lose interest and let you pass. Or at least that’s how I’ve been negotiating them. The road also featured 4 different military and police checkpoints, which eased the nerves a bit as far as highway robbery is concerned. But otherwise, yes, got to Palenque without incident.

In Palenque I stayed in a cool cabin just outside the gates to the ruins. I have since honed this strategy of staying as close as possible to ruins, making it easy to head in right when they open in the morning and having several hours to enjoy the place before the tour buses start showing up. In Palenque this spot was Jungle Palace, where $15 got me this neat little cabin for the night. 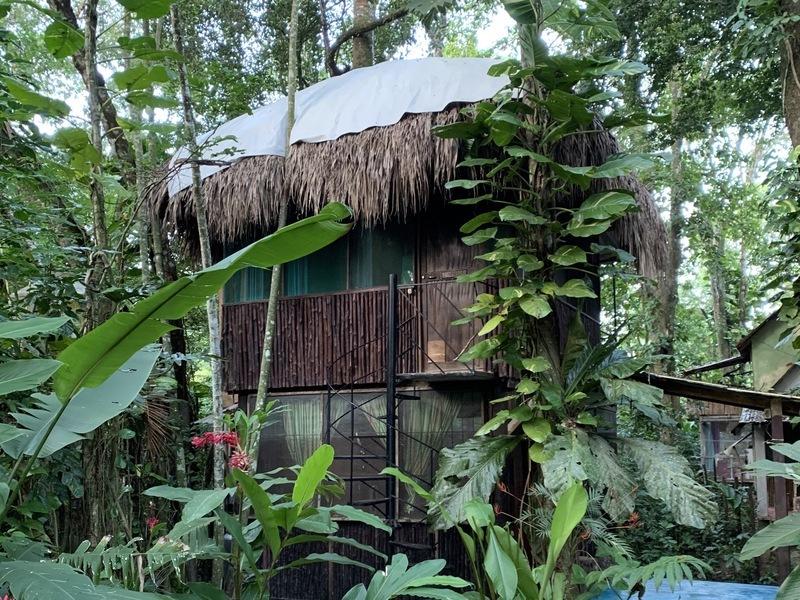 The Palenque ruins were really cool. Fairly expansive with the bigger temples out in the open, and a couple dozen more spread around in the surrounding jungle. 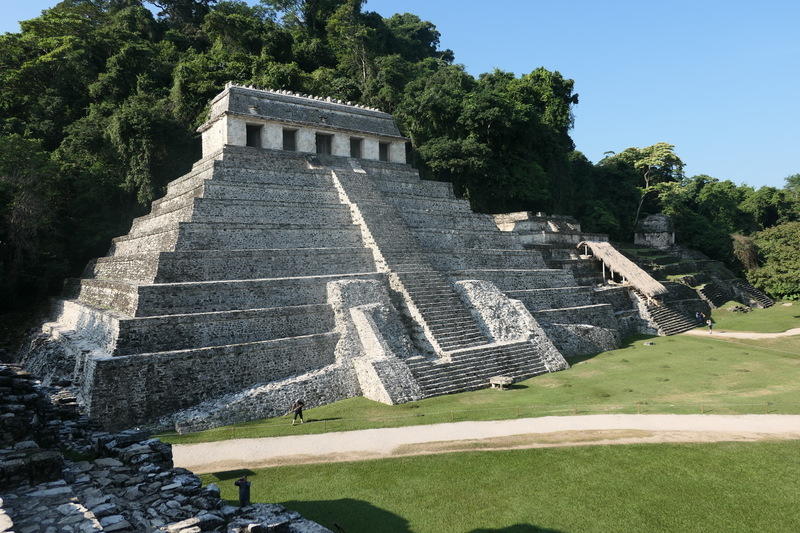 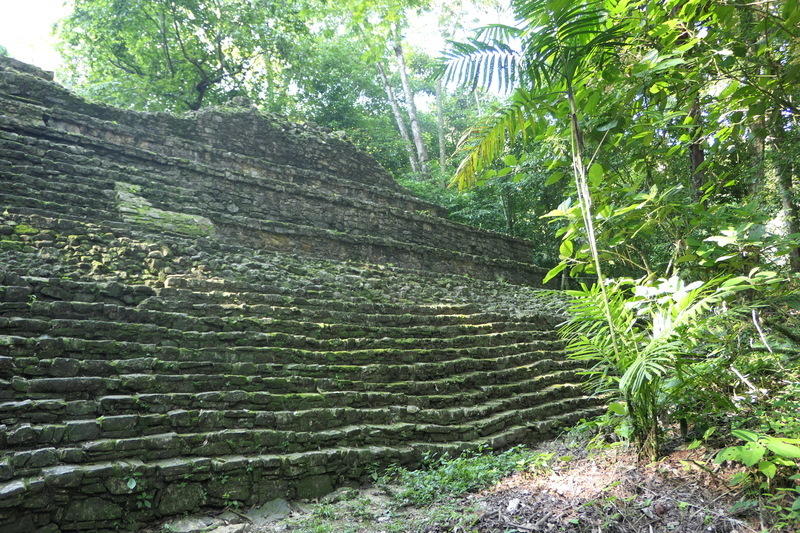 And then it was time to finally hit the Yucatan. I’ve been looking forward to coming here a lot. The three big things I came here to see were Mayan ruins, cenotes, and beaches, so after a night in Campeche on the west coast of the peninsula, I cut inland towards Chichén-Itzá. After securing lodging near the ruins, I went to check out my first cenote, located nearby.

Cenotes are giant limestone sinkholes, big pit caves flooded with water that are littered around the Yucatan peninsula and many of them connected by vast and unexplored underground rivers. They are a popular spot to take a dip (or snorkel, or scuba dive in the deeper ones). Some are open to the sky, whereas others are fully enclosed. This first one was called Ik Kil, and being close to Chichén-Itzá, it was quite a production, with several surrounding restaurants and gift shops. I opted not to take a swim, but did take advantage of the overpriced beer at the restaurant. 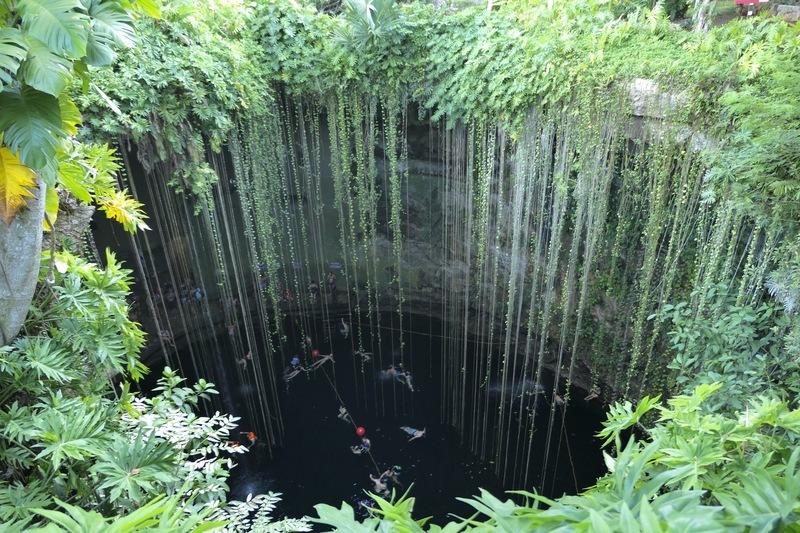 The next morning, per the strategy, I went in to Chichén-Itzá. 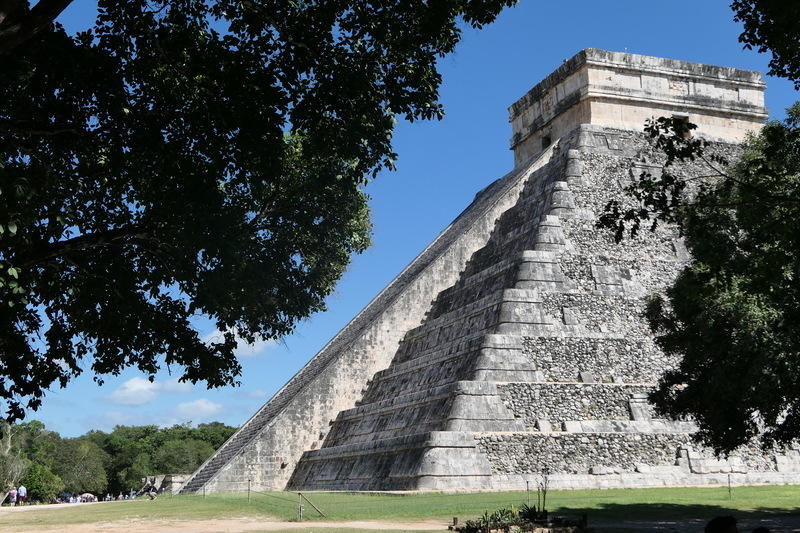 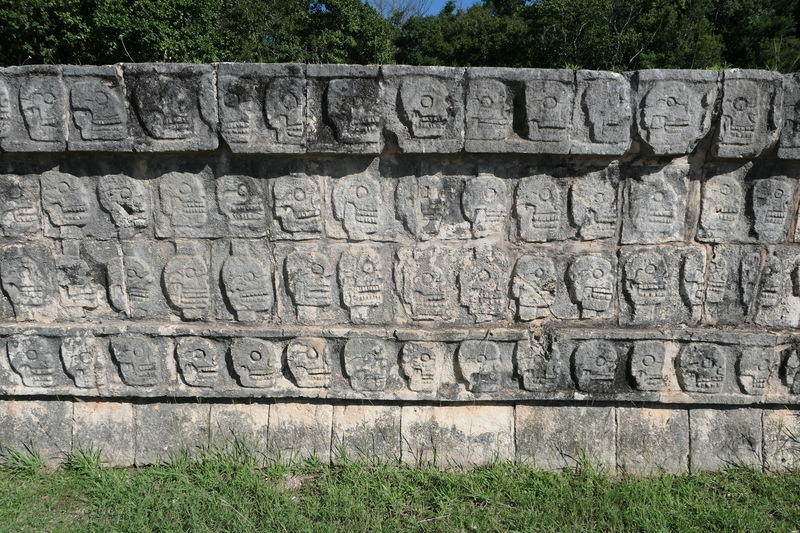 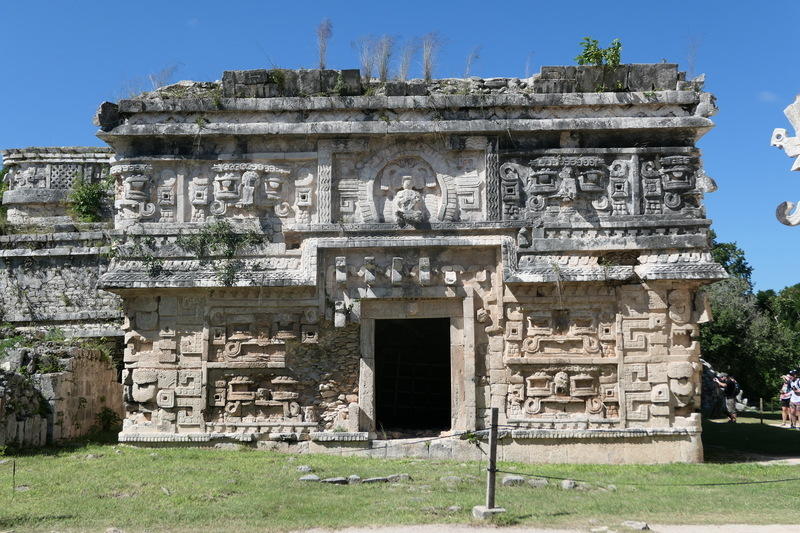 Pretty awesome. Also very touristy, with every walkway lined solid with vendors aggressively hawking their souvenirs, which are the exact same souvenirs every other vendor is aggressively hawking – “only one dollar today my friend!” Also it was not allowed to climb any of the pyramids, which is like, probably a good move archeologically speaking, but takes a bit of fun out of it. Nonetheless, really cool schmoozing around the pinnacle of Mayan civilization.

After exploring the grounds I got on the moto and had a short ride Cobá, a small town built around the ruins of the same name. In Cobá I stayed with a man named Pancho and his mother. He runs a coffee roastery and café out of his house, so his living room contains a commercial coffee roasting machine, a coffee bar, and his mother’s bed. I stayed in the cabaña in back, which was pretty sweet. 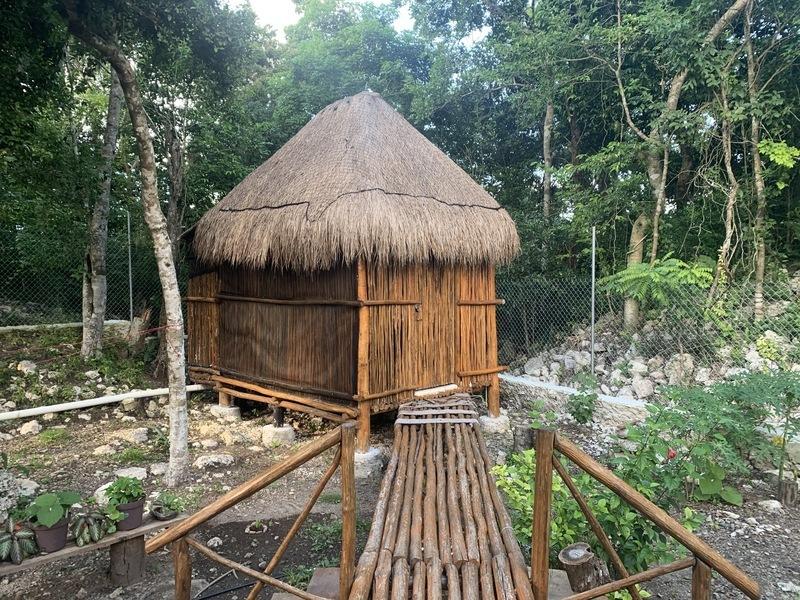 I went to the nearby cenote called Multum Ha, this one entirely enclosed and with much fewer people, and took a dip. The water was crystal clear and quite comfortable. 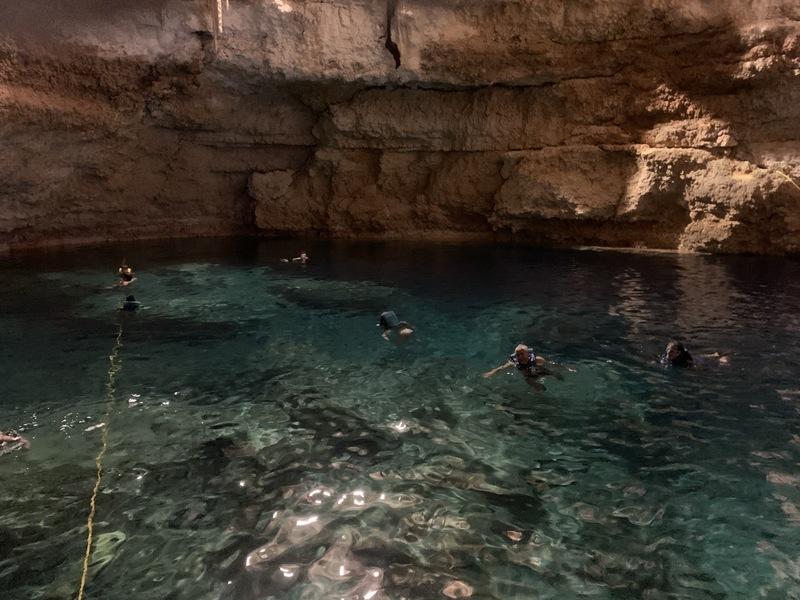 The next morning I executed The Strategy, and the Cobá ruins were really cool. By far the stand out is the Nohoch Mul Pyramid, one of the tallest on the Yucatan peninsula. You can climb to the top and find awesome views of the jungle canopy. 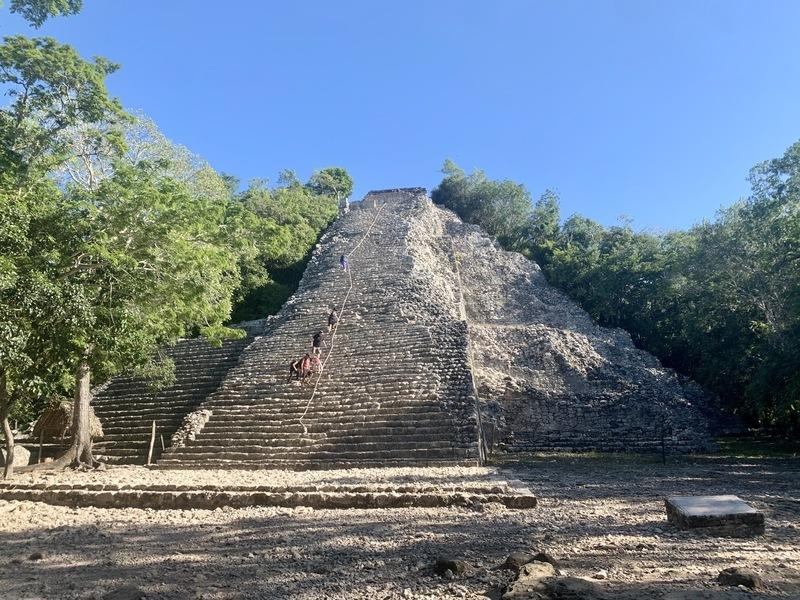 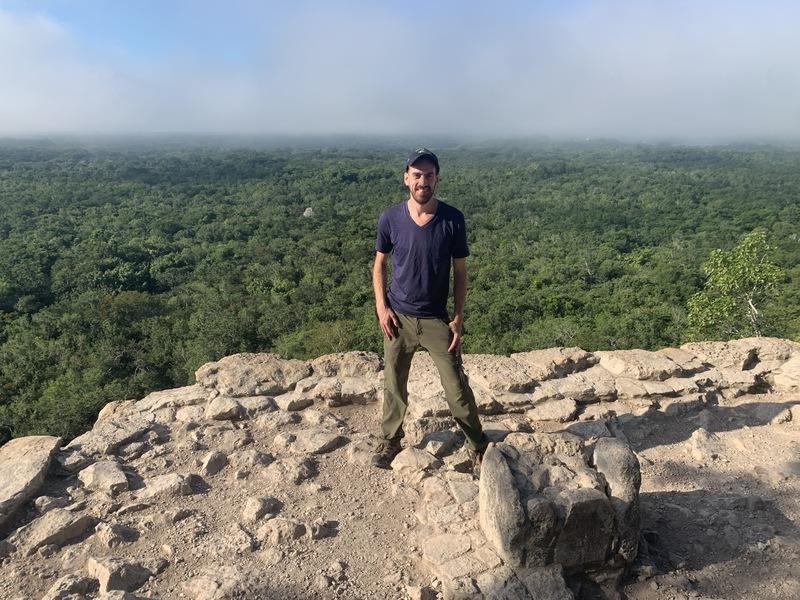 With the ruin and cenote boxes checked, I headed East to the coast. On my friend Meghan’s recommendation, I ended up on Xpu Ha beach, roughly halfway between Playa del Carmen and Tulum. Now, I’ve really never been much of a beach bum, and I never really know what to do. But I felt inclined to give the beach bum life the old college try, while I was in the area, and I think I got it right: maintained a steady buzz on margaritas and piña coladas, read a book (finished Down the Rabbit Hole by Juan Pablo Villalobos, started Disappearing Earth by Julia Phillips), and worked on a really solid sunburn. 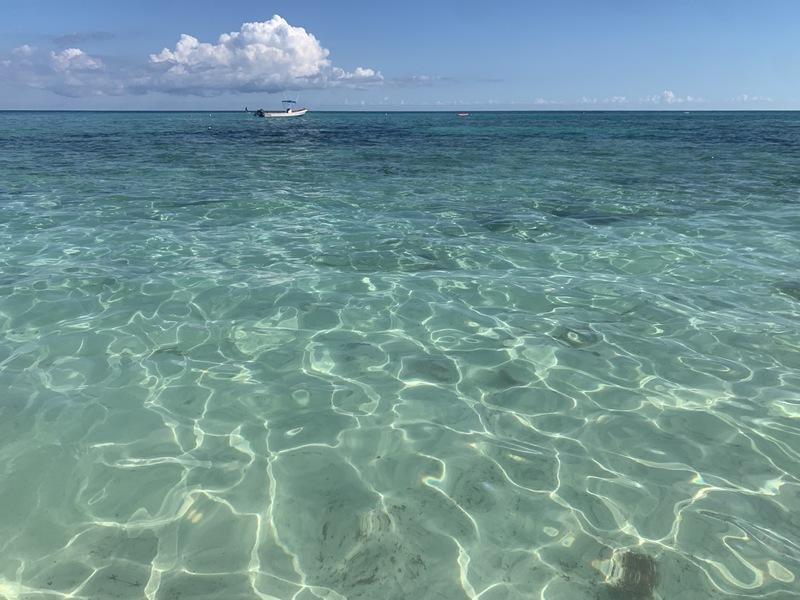 I was briefly in Mexico this past April, for my good friend Ben’s bachelor party. We rented a house in the Sian Ka’an Biosphere Reserve, which encompasses a tiny peninsula stretching down from Tulum. The place was idyllic, straight out of a Corona ad, and I wanted to investigate it again. I remember the ride down the peninsula being slow and bumpy, although my memory was somewhat clouded by the bottle of tequila and case of beer we emptied in the van. It’s a dirt road all the way down, as bad as I remembered it, replete with massive potholes, spanning 40 km in about an hour and a half of time. 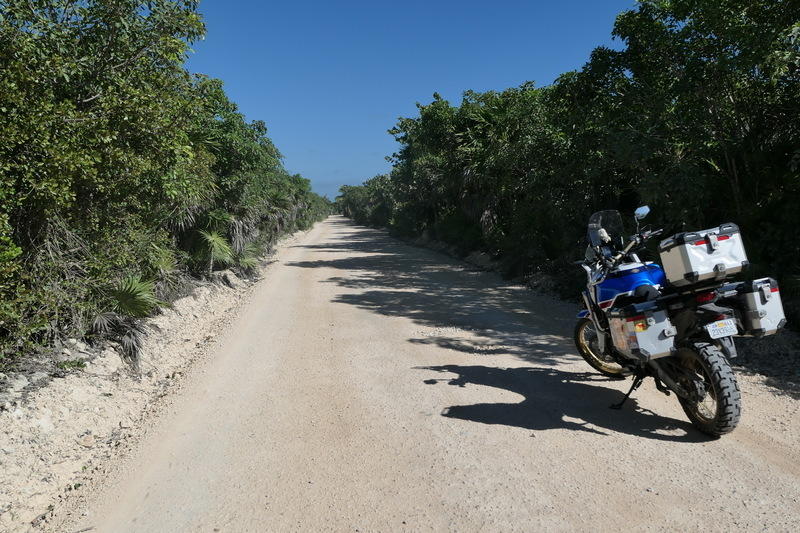 At the very end of the road lies Punta Allen. Punta Allen is really special. The creep of the Tulum resort sprawl ends abruptly at the gates to the nature preserve, leaving Punta Allen, a tiny fishing village, almost completely untouched by tourism down this crappy old road. It’s a unique glimpse into life here before the tourist scene really exploded. It’s like what every airplane magazine is trying to tell you awaits in some magical destination while you know it doesn’t because you’re being told about it my an airplane magazine. 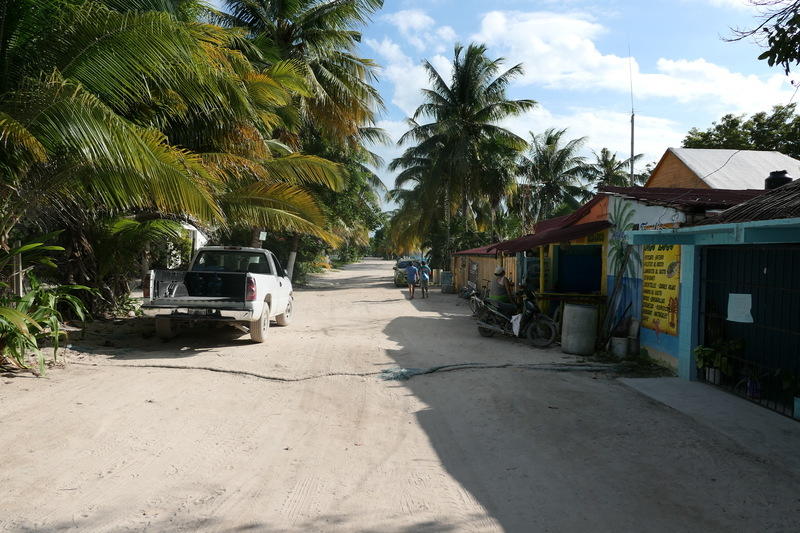 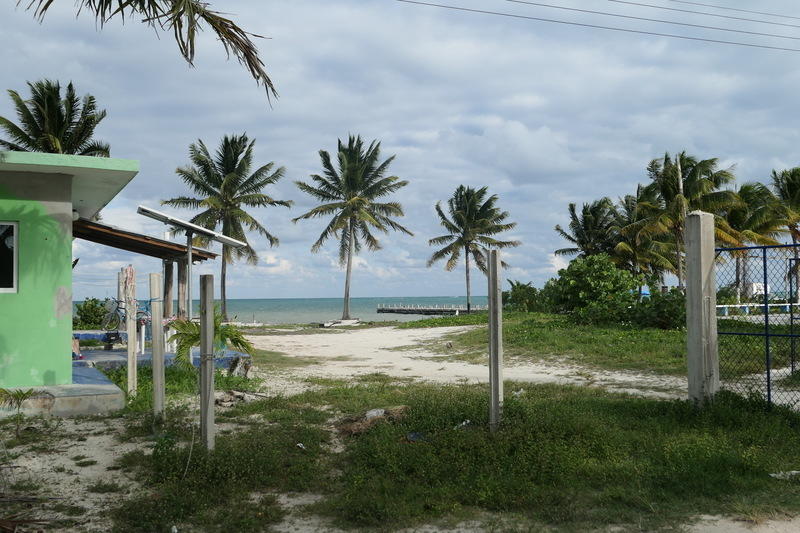 If you weren’t careful, you would not think this kind of place exists, or can still exist, on the coast of the Yucatan.

After a restful night on the beach there, this finally brings me (after another good soaking en route) to where I currently find myself, in Bacalar. It’s a small town on the shores of a big freshwater lagoon of the same name, nicknamed the Lake of Seven Colors. 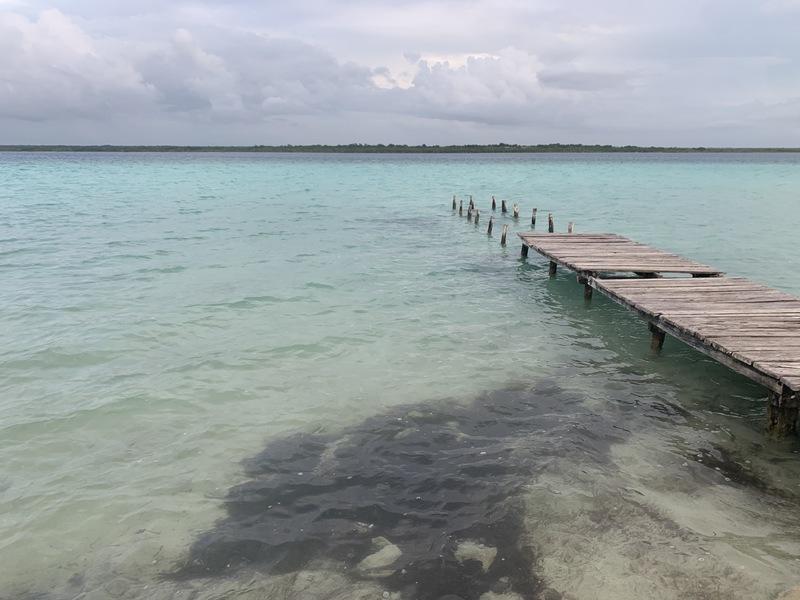 It’s a nice little spot, and a half hour’s ride from the Belizean border.

Thinking about crossing the border tomorrow, I can’t satisfactorily convey how rich Mexico is. It’s been a point of stress for me, actually. 48 days in Mexico and there are innumerable things I wish I could have seen but didn’t (Baja California, Mazatlán, eastern Michoacán, Guadalajara, Puebla, Xalapa, Veracruz, …) and at the same time there are so many places where I felt rushed and wished I could have spent so much more time in (the Huasteca Potosina, the many villages around Oaxaca City and the Oaxacan Coast, the state of Chiapas which I basically blasted through, so many cenotes and ruins and jungles left unexplored in the Yucatan…) In doing rough planning of where I wanted to spend my time in Mexico, there was always tension in finding a balance between breadth and depth of exploration, but really there wasn’t enough time for either. I could easily spend 6 months in Mexico and not run out of things I wanted to do.

I’ve got this date looming, basically the one fixed date I have on this entire trip, and that is the boat I need to catch from Panama to Colombia just after Christmas. It’s amazing how tyrannical this single date feels. On the one hand it feels punishing, making me leave all these things in Mexico left undone, to say nothing of much of the rest of Central America which I am really going to have to blow through. On the other hand, though, it forces me to spend a fair amount of time on that other continent, which I am sure I will be grateful for.

But the dilemma remains – breadth versus depth.